Martha Campbell was 13 years old when she was murdered close to her home in West Belfast on 14th May 1972.

The murder of Martha Campbell is one of a small number of child killings that lies unclaimed by any organisation.

Her family and local witnesses have long believed that the British Army shot Martha, having directed fire at her from a position in the flats of Moyard Park, which overlooked the area.

Another girl with her and a local man were lucky not to be injured or killed in the same bursts of fire.

There had been intense fighting in the area following the Kelly’s Bar bomb attack the evening before between the British Army, Loyalists and the Irish Republican Army (IRA). The shooting had stopped for a while, though, and Martha, her friend and local man were the only people on that stretch of the road on Springhill Crescent beside the waste ground to the back of Divismore Park.

In other words, the sniper targeted the unarmed civilians – two teenage girls and local man – deliberately.

No organisation ever claimed the killing although open-source material alleged that a Loyalist gunman of Ulster Volunteer force (UVF) killed Martha.

There was no police investigation into Martha’s murder and she would have become another forgotten victim of the conflict except for the prodigious campaigning and research work of her family which they share online: In Memory of Martha. 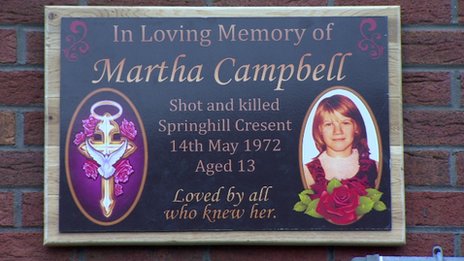 In its report into Martha’s murder, the Historical Enquiries Team (HET) alleged it had accessed “the only remaining Army records” relating to the incident. It recorded:

“From the papers supplied by the [British] Army to the HET review process and examination of the open source material, there is no evidence to place the Army in Moyard Park at the time that Martha was shot.” (p. 23)

These are not the only remaining British Army records and those discovered by Paper Trail prove that the family was correct and the British Army targeted people in the same area and at the same time that Martha was murdered.

The British Ministry of Defence (MoD) lied, and Police Service of Northern Ireland (PSNI) and the HET failed again.

Over the last number of years and in related investigations for families, Paper Trail has secured unredacted British military Brigade and Headquarters Northern Ireland files.

Buried deep within these secret files is proof that a British military unit was indeed positioned in Moyard and recorded shooting at a target in the area, at the time of Martha Campbell’s murder.

At 2010 (8:10 pm) the Commander of Land Forces (CLF) informed 39 Brigade Commander (Bde Comd) that the Chief of General Staff (CGS) and Secretary of State had approved an operation which we now know involved 1st Battalion Parachute Regiment enforcing dominance of Ballymurphy area following the violence which erupted after the bombing of Kelly’s Bar the day previously.

Orders were that the operation “must be represented as a ‘looking both way’ op” – allegedly not discriminating between Catholic and Protestant communities.

HQNI files later record the sweep of 1 Para through V2, which is a British military unit call sign – first into New Barnsley.

From there, 1 Para moved into New Barnsley Parade, New Barnsley Park and the north side of Springfield Road. 1 Para unit B1 then pushed through Divismore Crescent and into Ballymurphy to secure the Bullring.

At 2030 (8:30 pm), 1 Kings Regiment reports to Brigade that one of its units, Call Sign V2 was “now firing for some minutes” in the Ballymurphy area.

At 2034, 1 Para reported that Call Sign U14 [it was awaiting] was with it and that the planned operation was at V2’s location.

The British military operation then began and 1 Para units B1 – B4 pass through V2’s location and reported the reaction of the local residents as 1 Para moved through and secured New Barnsley, across Springfield Road, through Divismore and into the Bullring.

A retrospective report of at least 17 minutes (2052+ report of incident at 2035) from 1 Kings for 2035 (8:35 pm) alleges 11 high velocity shots at a gunman, Grid Reference (GR) 303748. Research shows that this is C Company 1 Kings alleging firing from its units at Corry’s timber yard and a hit north of Ballygomartin Road judging by the GR.

A report at 2110 (9:10 pm) reported that V2 fired 2 x High Velocity rounds at a target on the Springmartin Road from Moyard Park.

This tells us that Call Sign V2, 1 Kings was in the Moyard area.

V2 had reported at 8:30pm that it had been firing “for some minutes” before that report. At 9:10pm it reported firing from Moyard Park.

Divis Park is military shorthand for Divismore Park (or a slight error) and on the other side of the waste ground is the area of Springhill Crescent where Martha was killed.

This is damning proof that V2, 1 Kings admitted firing shots from Moyard at an alleged gunman in the exact area and time that Martha was murdered.

The British Ministry of Defence failed to admit this to the original inquest or subsequent investigation by HET.

1 Kings then reported to Brigade at 2120 hours (9:20 pm) that the 13-year-old girl who was previously reported as 6 years of age, was called Martha Campbell, that she was shot at 8:30 pm but “circumstances not known”.

This information is then transmitted from Brigade to Headquarters Northern Ireland at 9:17 pm.

A Situational Report (Sitrep) written the following morning clarifies that 1 Kings fired 23 high velocity rounds into the area of the wasteground from Moyard Park.

1 Kings does not claim the murder of Martha even though its V2 unit was the only firing in the area at the time. 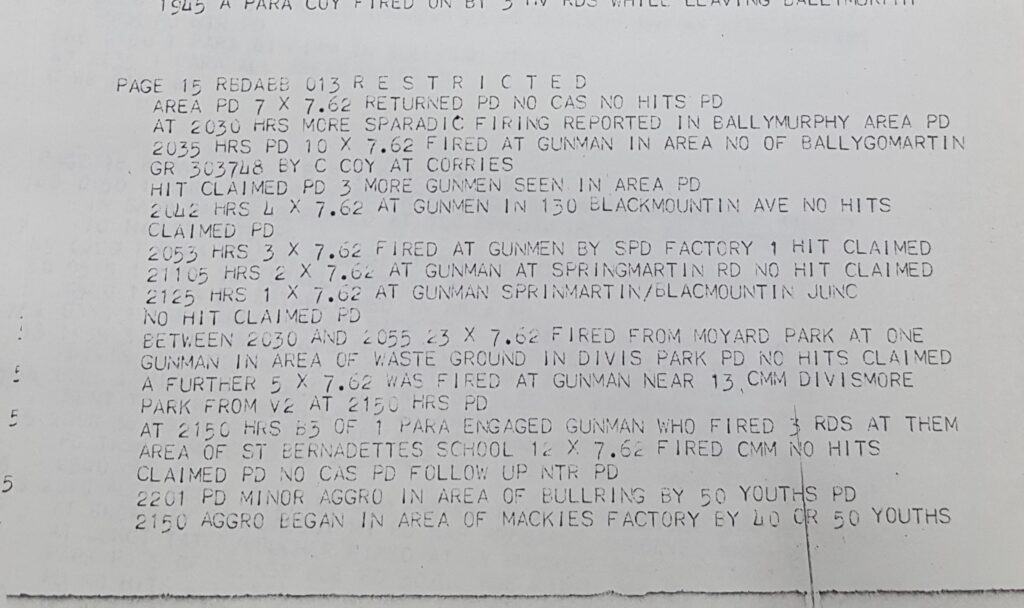 It may stand to reason that V2 was a static Observation Post at Moyard Park overlooking the whole area and protecting the flank of 1 Para as it moved through V2’s area, into New Barnsley and into Ballymurphy, rather than an armed patrol firing from Moyard Parade as 1 Para passed through.

Nevertheless, the alleged shooting by V2 from 2030 – 2055 needs further examination as neither 1 Kings nor 1 Para (which is then in the vicinity) report any shooting as we would expect.

Paper Trail knows which files we should interrogate to flush that information and we have requested them from the British Ministry of Defence on behalf of the family.

Again, 1 Kings reported at 8:30 pm: “V2 now firing for some minutes” so 1 Kings’ contemporaneous reporting is at odds with its retrospective report.

Later a [Lt] Colonel Thomas and Royal Military Police (RMP) reported information regarding the young victim, which was then passed to HQNI. The “Col” abbreviation can be Colonel or Lt. Colonel in British Military files.

A Lt. Colonel John Francis Thomas (Army No. 346187) served as Assistant Provost Marshall in HQNI from April 1970 to July 1972. This may be him and may therefore be important information due to his rank and parent regiment.

It should be noted that MoD/HET denied any RMP Special Investigation Branch (SIB) investigation, which should be activated in every British Army shooting, but these records at least prove that RMP files should have information relating to the killing especially if a British soldier of such high ranking was personally involved in reporting to HQNI.

Again, we have targeted these files at British Ministry of Defence.

“The Campbell family fought for nearly half a century to get closure on what happened to our sister, Martha, and who murdered her. No organisation ever claimed responsibility for her murder but the family always believed it was the British Army, based on eyewitness accounts of where the shots came from in Moyard Flats.”

“However, the British armed forces failed to recover a bullet as evidence and denied the existence of any British military unit in the vicinity.”

“This new evidence from the British Army’s own files places a unit of 1 Kings in Moyard Flats, firing 23 High Velocity shots at an alleged target into the area where Martha was walking and at the time our sister was murdered.”

“This critical information was not made available to the family, the original inquest or the Historical Enquiries Team. It was covered up to protect those responsible for our sister’s murder.”

These files substantiate the witness accounts and the great research by the Campbell family.

These British Army files record no gun battle or three-way firefight involving the British Army, Loyalists and Republicans in the area when Martha was murdered.

The British Army files only record V2 1 Kings streaming fire into the area where Martha was murdered prior to the launch of the 1 Para operation.

Retrospective reporting by 1 Kings attempts to amend the time and location of V2’s shooting from the minutes leading up to 830pm, to 830pm to 855pm; and from Moyard Park to Moyard Parade. The latter is rectified to Moyard Park the following morning in the Situational Report.

Nevertheless, neither 1 Kings nor 1 Para, which had used the V2 position as a jump-off point for its operation at 8:34pm, reported 25 minutes of firing between 8:30pm to 8:55pm as 1 Para arced from Moyard Park into New Barnsley and down into Divismore Park and Ballymurphy.

1 Para reports its B4 unit through V2 at 8:51pm and “No reaction”.  A Brigade review of the operation at 9:40pm to the 39 Brigade’s Brigade Major reported: “Reaction so far 15 children stoning.”

V2’s firing was for some minutes up to 8:30pm from Moyard Park into the area of Martha’s murder although 1 Kings does not claim it, it amends V2’s shooting timings and location retrospectively.

Of course, the subsequent failure to investigate by RUC or RMP – and the MoD’s failure to admit its soldiers were in Moyard and firing into the area between Divismore Park and Springhill Crescent – is highly suspect.

Furthermore, the coroner at the original inquest was not given this critical evidence.

As for the failed PSNI/HET failure, either:

Paper Trail knows where further information will be located although that information is retained by MoD and not in Public Records repositories – Paper Trail has since initiated targeted FOIs for this material on behalf of the Campbell family.

As highlighted by Paper Trail recently, 1 Kings then killed another 3 unarmed teenagers a few weeks later during its Springhill-Westrock Massacre. Another 13-year-old schoolgirl was among 1 Kings’ victims. Her name was Margaret Gargan.

Another two murdered by 1 Kings during the Springhill-Westrock Massacre included a family man and the local parish priest (Footnote 1).

If the British armed forces had investigated Martha’s unlawful killing and held the British Army to account, 1 Kings may not have killed civilians in the area in the subsequent weeks, including the unarmed teenagers in Springhill.

Paper Trail is dealing with a number of families from both sides of the community impacted by other 1 Kings murders and subsequent cover-ups around the same time. These followed a pattern of Kings’ violence against unarmed civilians and were not isolated incidents.

We will be releasing a report covering these all in the coming months.

In Memory of Martha – the family’s website and research.

Casual Collusion and a Tale of Two City Estates

Irish Times: New Evidence Emerges in Shooting dead of Teenager in Belfast in 1972

5 thoughts on “The Murder of Martha Campbell, Schoolgirl”