In a world of smoke and mirrors, the case of Ranger Hammond is still hazy to this day.

The British state kept it deliberately so, although new documents we publish here will help to set the record straight – especially for Ranger Hammond.

After the damaging loss of its Four Square Laundry intelligence-gathering operation (never mind the killing of Military Reaction Force agents and an operative whose families have yet to receive a proper investigation), British military intelligence got its own back on the IRA.

Yet again, though, the British psychological operation compromised another British soldier when the IRA kidnapped him, shot him and left him for dead.

Ranger Louis Hammond was picked up by 2 Field Regiment, Royal Artillery (2 FD) following a Military Reaction Force (MRF) shooting of a civilian on 13th May 1972.

Files discovered by Paper Trail also proved that Patrick McVeigh had been killed and four civilians badly injured by the MRF close by and a couple of hours earlier.

Hammond was allegedly Absent Without Leave (AWOL) from the British Army since Bloody Sunday and then joined the IRA.

The British military records state that it retired him from special duties in December 1972 when “it was decided that Hammond had outlived his usefulness in the MRF. He was taken to England and left in London.”

This is when Hammond’s story becomes murkier still.

In April 1973, he gave an interview to the Sunday Times, which reported IRA embezzlement of funds and Hammond’s time with the MRF. In the interview, it said he had tried to get word back to the IRA that MRF forced him to work with its covert operatives.

So, he portrayed himself as a potential triple agent, loyal to the IRA but disgruntled at the IRA’s alleged embezzlement of money.

It was obvious to local IRA who had given the interview and one of its units picked him up in south Belfast.

Hammond was beaten and admitted to his MRF activities. After the interrogation, the IRA bundled Hammond into a car and shot him in the belly and head. Miraculously he survived.

The British military files for his pension request which I discovered in 2015, show that the British Army and Ministry of Defence politicians discuss that he was a double agent who went rogue and tried to help the IRA again.

A report by the Adjutant General of the British Army, in charge of policies and procedures records that they did not handle the administration of Hammond and other Freds correctly.

They discussed the severely injured Hammond as if he was a traitor to Queen and country who should be given a pension if only to stop him going to the press again and divulging British military secrets.

Subsequent files relating to his compensation claim in 1976, though, throw a lot more light on Ranger Hammond’s Special Duties.

A written note from a conversation with the Permanent Secretary / Under Secretary of State (Army) from 1973 in this file records:

“Hammond ceased to be a deserter when we apprehended him and used him on special work. As far as he is concerned, from then on he obeyed orders given by the Army and was not therefore a deserter. This was recognised by the proposed settlement of the financial aspects of the case.”

The British Ministry of Defence recorded the details of Hammond’s settlement in this file too. The British Army discharged Ranger Hammond in August 1974, giving him a pension and lump sum as well as support for his disability. He was a paid British soldier until his discharge.

These later files tell a different tale about his service and special duties.

Ranger Hammond returned to Belfast in January 1973 and the AWOL story was an agreed cover at this stage but he was giving information to RUC Special Branch. The records allege that his IRA interrogators blamed him for passing information, which led to the recovery of 10 rifles by the Security Forces. It continues, “this in fact was true”. 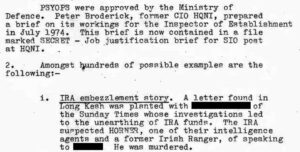 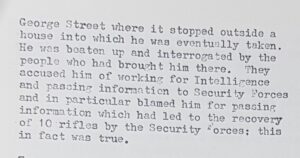 This leaves the question: why did Ranger Hammond give the infamous interview to the Sunday Times?

The records show he used his MRF activities as a backstory but the journalists had used this in the article as well as the embezzlement story.

A file from a colleague goes further as it records examples of psychological operations (PSYOPS) run by the British Army at the time. It should be noted that the British Army testified to the Bloody Sunday Inquiry that it did not run any PSYOPS in the north of Ireland during the conflict, which was fantastical, of course. This meant that British Army top brass committed perjury at the Inquiry.

Here, the top example from “hundreds of possible examples” is a reference to Ranger Hammond’s special duties following the disbandment of the MRF. It refers to a Ranger Horner who was killed but I am certain it refers to this case and I have redacted the name of the reporter.

Regarding the embezzlement story, which did indeed cause major disruption and suspicion within IRA ranks at the time, it records:

“A letter found in the Long Kesh [prison] was planted with [reporter] of the Sunday Times whose investigations led to the unearthing of IRA funds. The IRA suspected HORNER, one of their intelligence agents and a former Irish Ranger of speaking to [reporter]. He was murdered.”

Whether the named reporter was a willing plant or unknowing participant of the British military intelligence psychological operation remains moot from this file and other files in our possession although his allegiance and independence have been queried by others due to his body of writing, especially those concerning other British intelligence operations.

The embezzlement story was a British psychological operation against the IRA, which used Ranger Hammond. Ranger Hammond was working for the British Army and was paid as such.

The British Armed Forces should also give Ranger Hammond proper recognition instead of recording him for history as a traitor to Britain.

Again, though, the British Army left its soldier severely exposed and he was lucky to survive the subsequent IRA attack. Sapper Ted Stuart was not so lucky in similar circumstances and left similarly exposed by his commanders.

MRF Freds, Seamus Wright and Kevin McKee, were bundled out of Belfast at the time of Sapper Stuart’s killing and subsequently executed by the IRA even though they had expected amnesty. The IRA then disappeared their bodies and their families had to wait until they were discovered in a shallow grave in Meath in 2015 before they could give them a proper burial.

This is the murky world of Britain’s Military Reaction Force and its agent handling, which has never been properly investigated as the British state does not want us to know how it collects intelligence, or indeed, how its intelligence-gathering operations could lead to the death of its own operatives.

These chronic failures are not good recruiting tools.

Indeed, it is my opinion that the PSNI’s Operation Everson is another attempt by the British state to manage information and cover-up the true depths of the MRF’s murderous activities and negligent intelligence-gathering operations; and there is a trail of devastation and death to cover-up.

In the meantime, none of these families have received a fair and just investigation… and Britain legislates for the right of its agents to commit crimes in the pursuit of intelligence – read more…

Kevin Winters of KRW Law is the legal representative of the family of Sapper Stuart. He said:

“The Military pursuit and control of intelligence were driven to such an insane level that life – anyone’s life – was expendable. That’s clearly shown in this latest case.”