I write this on the 43rd anniversary of the murder of young mother Jean Smyth-Campbell. My thoughts are with her daughter, Sharon, and all of the Campbell family this evening, and I remember Jean as I write.

Jean Smyth-Campbell was shot dead on the Glen Road just before midnight of 8/9th June 1972. The car in which she was a passenger was attacked for absolutely no reason. The family was given scant information except  to say that she was shot by the IRA, and probably because they mistook the car as an undercover British Army vehicle.

But there was no evidence of this. In fact, the Royal Ulster Constabulary (RUC) did not even secure and examine the bus terminus where she was shot dead. Ballistic tests that the RUC took proved insufficient to detail even the type or calibre of the ammunition used when examined in 2006 and 2007.

This perturbed the family as they testify that they heard machine-gun fire when Jean was shot, and actually witnessed the bullet-ridden car – Jean’s father, William, was picked up in it by the survivor after Jean’s body was bundled into the back of a taxi and taken towards the hospital. It never reached there as the taxi, with Jean in the back, was stopped and taken into Andersonstown Police Station. No explanation has been given for this.

The Historical Enquiries Team (HET) has recently reported that the car was only hit with one bullet, though, based on an undated report by an RUC Scene of Crime Officer (SOCO).

Nevertheless, photographs taken of the car at the time have disappeared from police files. So too has the post mortem examination.

The family are adamant that the car was riddled.

An interesting article appeared in the Belfast Telegraph in October 1973 which asked “Was Jean Smyth Shot By Mistake?”

In it the writer raised the question whether an undercover unit of the British Army called the Military Reaction force had killed Jean by mistake as a similar attack was carried out by the unit two weeks later in exactly the same place – the bus terminus on the Glen Road where 4 civilians were shot in an another unprovoked attack.  The unit which included Capt, James Alastair McGregor and Sgt. Clive Graham Williams got off absolutely Scot free, even though the four civilians were unarmed and the soldiers were using a non-Army issue Thompson sub-machine gun (favoured by the IRA at that time) and bullets from RUC stores.

He goes into some detail regarding the circumstantial evidence for this but then concludes that it appeared the IRA shot Jean thinking there was British Army personnel in the car. After all, he writes:

“There were no reports at the time of the Army being in the area and there was no organisation prepared to admit the killing of Mrs Smyth.”

At no point does the HET raise this question of MRF culpability even though they recounted this news paper article and the Lost Lives insertion which also quotes it.

Around her anniversary last year we accessed files in the National Archives, Kew, which provided information regarding Jean’s murder from Headquarters Northern Ireland. The secret files contained sensitive reports from British Army regiments and RUC divisions throughout the north written in an operations log as they were reported.

There were several reports that the car in which Jean was murdered was indeed machine-gunned, just as Jean’s  family testify. One from the British Army reports:

There was even a report to the same from the RUC recording the testimony of the survivor that “there was a burst of fire which hit the car.”

The car had been examined and photographed by the RUC by this time.

But the only report of a number of bullets being expended in the area was a retrospective record which noted that a covert unit of the MRF had fired 10 bullets from a car at alleged targets behind a hedge in that very area (a few hundred metres short of the school) a few hours later. Even though it was pitch black, the unit was travelling in a car and the targets were hiding behind a hedge, the MRF claimed a hit and reported that one had a rifle.

Within the very same Serial, in that very area, the logs record that women were accusing the Security Forces (SF) of murder as we believe that Glenveish is Glenveagh, directly opposite the bus terminus.

At no point in the HET report does it mention that these accusations were raised and that the MRF were in action that night.

The retrospective report by the MRF is incongruous to the other records as no other regiments report the burst of fire at that time and there were no gunshot casualties admitted to hospital which could be tied to the account.

This in itself does not prove anything, however suspicious it may be except – and this is horrific to have found this – we have proof that the British Army Brigade Major on duty in Headquarters Northern Ireland that night connects Jean’s murder to a shooting by the Security Forces.

The record by the Brigade Major (BM) who was in charge of operations and intelligence at HQNI states:

“Police are dealing with the dead girl found in the taxi. It is known that the SF [Security Forces] claimed a hit in the KP19 shooting”

KP19 was Key Point 19 in military parlance, a sangar and/or the area covered by the sangar overlooking the bus terminus on Glen Road where Jean Smyth-Campbell was murdered.

The family has taken this information to their lawyers along with the failed HET report, and it will feature in future litigation and a complaint against the police.

The state will have to account for its soldiers’ actions that night, and the subsequent “investigation” by RUC and HET. To that end , Paper Trail has provided the legal representatives with a targeted archive list for disclosure which will allow us to cross-reference the movements and actions of the Security Forces when Jean was murdered.

Meanwhile, the authorities have moved to close down the information stream “whilst access is reviewed” even though it was open to the public since 2003. This may be a little too late as we have photographed every single file. Nevertheless, their moves make a mockery of any notion of Freedom of Information, never mind truth or justice. 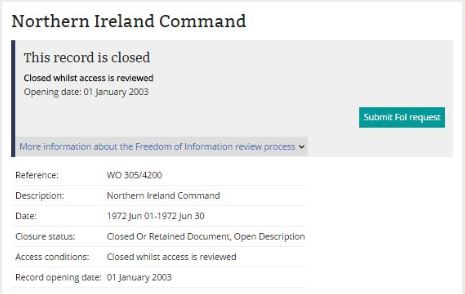 If you or anyone you know has information regarding the murder of Jean Smyth-Campbell including the circumstances surrounding that night, please contact Niall Ó Murchú of Kinnear and Co. Solicitors.