The documents found at Kew National Archives by Paper Trail regard the RELEASE of Gusty Spence by RUC in October 1972 even though he was on the most wanted list after his first “escape” from prison custody in July 1972 – the British prison authorities allowed the convicted murderer to attend his daughter’s wedding during one of the most violent periods in the conflict. Spence absconded after the wedding.

Acting on “hard information”, British soldiers from the 1st Battalion of the Parachute Regiment (1 Para) picked Spence up along with 60+ UVF men from a drinking club in the Shankill area of Belfast. These included a number of UVF’s commanders like Big Bill Campbell, head of the UVF in Scotland, and 3 of the McGurk’s Bar bombers.

Spence and the others were transported to Castlereagh to be identified and processed by RUC which should have been an easy exercise even if he was in disguise, as Spence was so well known. He was easily identifiable anyway by his tattoos (and that is how 1 Para identified and recaptured him the following month, in November 1972).

The RUC quite simply released him though.

Rather than recording a police mistake, these files document the realisation by the British political and military elite, including the British Prime Minister himself, that Spence had been captured as planned but released by the police, undermining the whole British Army operation.

The documents also record the Chief Constable at the time was forced to investigate Spence’s release by his force and report back to government, whilst the British Prime Minister, Edward Heath, was alerted prior to a meeting with Taoiseach Jack Lynch.  Heath though was advised to follow the line that allegations of Spence’s escape were being investigated.

Since then, the government line taken was that it was a police mistake and that Spence had not been identified by the officers on duty, and that there was no disagreement with the British Army.

These records refute this.

The documents are highly significant for scores of cases involving murder by the UVF during this time as the RUC:

How could any family expect a fair RUC investigation into the murder of their loved ones by pro-state extremists if their officers released the most wanted Loyalist murderer?

In Roy Garland’s book on Gusty Spence, reference is made to the release by “John” who Garland notes is Gusty’s closest friend and fellow UVF member (page 150):

“While we were there we were searched and photographed – the usual pattern. Now Gusty has tattoos, and markings are well noted – they recognise you by your marks. We were sitting waiting to be interrogated and I was beside Gusty and a few others. Two detectives popped their head in to look over to us and smiled”

The British arrest operation was highly political and created a volatile situation in the Shankill. Nevertheless, these documents prove that the RUC released Gusty and undermined the actions of the British Army. The RUC helped create the myth that Spence was The Orange Pimpernel.

The documents also record a report commissioned by the Chief Constable at the time and the same was noted to the British Prime Minister.

Paper Trail has lodged a Freedom of Information request to PSNI for this report as the whole incident – including release and cover-up – is so important to scores of families.

A note to the Prime Minister (which he actually initials EH and dates) records:

“Prime Minister A bad night – trouble particularly from the Protestants”

This was at a time when organised Loyalist violence was being denied by the British authorities and Protestant extremists were not subject to interim custody orders and interned like Catholics. Indeed, a highly discriminatory “Arrest Policy for Protestants” existed at that time which ordered that Protestants were not to be interned.

The infamous 1 Para raided the club as it had hard evidence that Gusty Spence and over a dozen other UVF leaders were there. Gusty at this time was an escapee and the highest profile Loyalist on the wanted list. The UVF was also supposed to be a proscribed organisation at this time.

We know from the HET that amongst the 60+ UVF members arrested with him was 3 of those named as being the McGurk’s Bar bombers and Big Bill Campbell, the head of the Scottish UVF who provided the gelignite for Loyalist pub bombings at the time.

At a time when the state denied the existence of organised Loyalist violence, this document admits that UVF and UDA gunmen were seen, and members of the Security Forces were actually abducted during the disturbances.

It also records that the British Army’s arrest operation failed to net Gusty Spence although 60 others were arrested.

We now know that Gusty was among those arrested and handed over to the RUC at Castlereagh. There, he would have been highly recognisable (even in disguise) as he had visible tattoos, which is how 1 Para eventually caught him the month later.

A cursory check by RUC would have proved that the hard information provided to the Army was correct and that the arrest operation was indeed successful.

This document again records an open admission that Catholics are being killed in Protestant areas (but Protestant extremists are still not being interned).

Doubt began to spread that the British Army operation to arrest Gusty Spence was actually successful. The UVF had reported that he had been arrested and released whilst the “RUC replied in a statement that a thorough check was being made”.

Archive 4:  “Note of a meeting in the Northern Ireland Office on Monday 16 October” featured leading civil servants from the NIO and FCO, and leading military officers of the MoD.

“The Chief constable had ordered an inquiry into the arrest of the UVF leaders and the reported release of Gusty Spence. Meanwhile it was imperative that nothing should be said which could indicate any disagreement between the Army and the Police on the events of that night”

It is obvious that there was now a disagreement between the RUC and Army as the Army, and British officials begin to realise that the RUC did indeed release Spence.

Archive 5: A report on the “Growth of Protestant Violence” prepared for the British Prime Minister on 18th October 1972 prior to his meeting with Taoiseach Jack Lynch.

Again this is an open admission that “Protestant gunmen” were involved in many shooting incidents over the 11-12th October 1972. 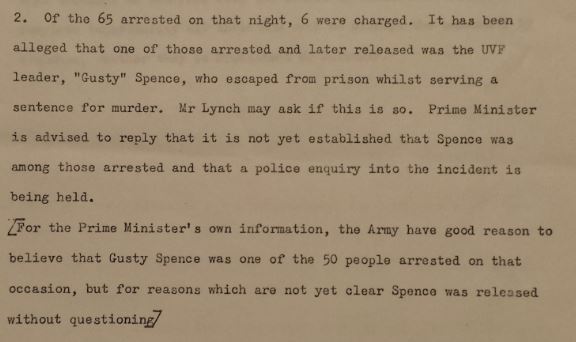 “It has been alleged that one of those arrested and later released was the UVF leader, Gusty Spence, who escaped from prison whilst serving a sentence for murder. Mr Lynch may ask if this is so. Prime Minister is advised to reply that it is not yet established that Spence was among those arrested and that a police enquiry into the incident is being held”

“[For the Prime Minister’s own information, the Army have good reason to believe that Gusty Spence was one of the… people arrested on that occasion, but for reasons which are not yet clear Spence was released without questioning.”

This shows that the British Army now believed that Spence had indeed been released by the RUC and that this would be highly damaging and embarrassing political. It show that the RUC and Army are at odds.

This tells how 1 Para re-capture Gusty Spence. We now know that it was Derek Wilford of Bloody Sunday infamy who arrested Spence after recognising his tattoos.