The McGurk’s Bar Bombing: Post-Script is our latest publication.

The McGurk’s Bar Bombing: Post-Script features new evidence discovered by Paper Trail manager Ciaran MacAirt whose grandparents were two of the many victims of the atrocity. It is FREE to download.

Post-Script features new evidence either missed or buried by historical investigations of the Office of the Police Ombudsman and Police Service Northern Ireland.

Among critical new information published in The McGurk’s Bar Bombing: Post-Script, is proof that there was a covert British Army operation in place on the night of the explosion near McGurk’s Bar and the British Army recorded the escape of the suspect car minutes afterwards.

Furthermore, there is final proof that the British state’s lies, which blamed the victims for the Massacre, began with collusion between the police and the British Army Commander in charge of Belfast who is still alive. 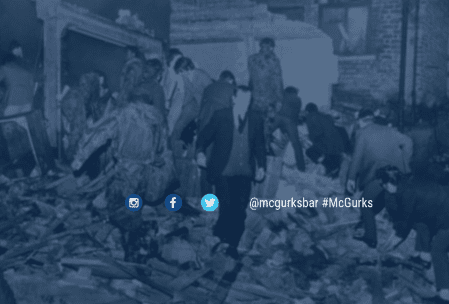 The 45th anniversary of the Kelly’s Bar attack and cover-up just passed. A startling archive find from British military archives proves that a member of…