Secret British Army files prove that Joe McCann was no threat when shot in the back by soldiers of the Parachute Regiment.

The family of Joe McCann will present the evidence to the Attorney General when seeking a fresh inquest into his killing on 15th April 1972.

Unredacted British Army files secured by Paper Trail prove Joe McCann was no threat when he was shot in the back and killed by shock troops of 1 Para in Joy Street, Belfast. He was unarmed.

The previously unpublished British Army 39 Brigade and Headquarters Northern Ireland files were discovered in the National Archives, London.  Joe McCann was unarmed when killed but the trial of two Paras accused of his murder collapsed on 4th May 2021 due to failures of the British authorities’ arrest procedure.

The British Army files record that undercover Special Branch (SB) officers of the Royal Ulster Constabulary (RUC) were “trailing Joe McCann” and alerted a patrol of 1 PARA. A file continued:

“SB stopped McCann and said ‘We are arresting you, we are SB’. McCann ran off and was challenged. He continued moving. He was shot at 8 times by the Para patrol.”

“SB were trailing McCann at the time. They made themselves known to the ptl [patrol] and attempted to arrest McCann when he ran off. 8 shots were fired at him by the ptl [patrol].”

“They [the SB undercover officers] said they were trailing Joe McCann and intended to arrest him and asked for assistance. McCann was seen to come out of Little May Street and turn down Joy St. The ptl [patrol] approached McCann, identified themselves and said they were arresting him. McCann immediately ran off down Joy St. A member of the ptl [patrol] challenged him twice without effect and fired two shots over McCann’s head. This still did not stop McCann. The same soldier fired one aimed shot. [REDACTED] fired a further 4 aimed shots. The other two soldiers also fired one aimed shot each. McCann was hit in the rear.” 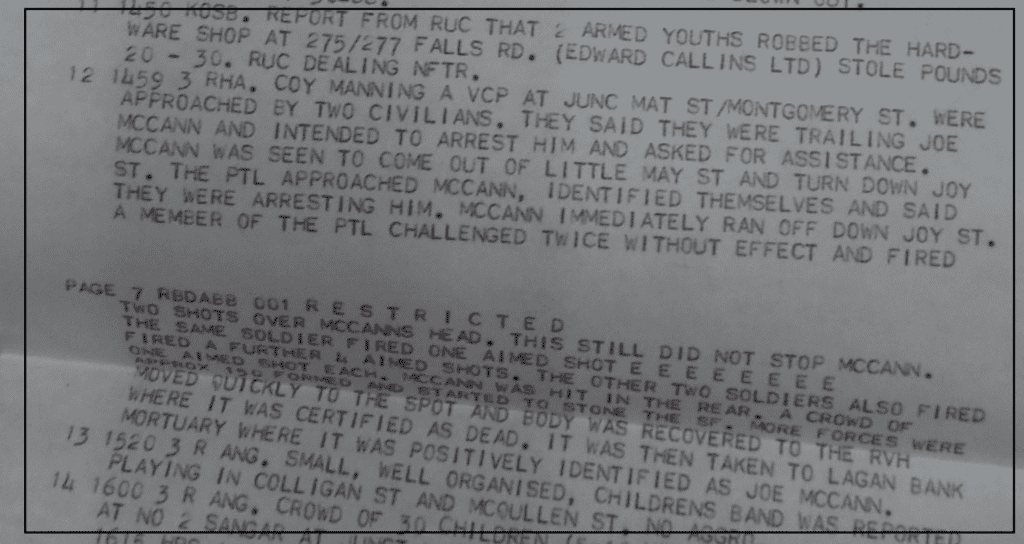 “Foot patrol of 1 Para recognised Joe McCann… According to policeman he [Joe McCann] fired Thompson [submachinegun] at SF [Security Forces]. McCann ran away but was shot in stomach.”

The British Army’s own files thereafter prove that Joe McCann was unarmed and posed no threat when he was shot in the back and killed by the soldiers of 1 PARA. If he was close enough for the British Armed Forces to initiate an arrest – as proved above – he could have and should have been apprehended without lethal force being used.

That is British law on paper at least.

Paper Trail has submitted all of the unredacted files including those above to the family’s legal team and has launched targeted requests for information from the British Ministry of Defence on behalf of the family of Joe McCann.

Even by the British Army’s own standard Rules of Engagement – the Yellow Card – the British Armed Forces had no legal reason to shoot Joe McCann in the back, even if he was a member of the Official Republican Irish Republican Army. He was unarmed and no threat to the lives of the British soldiers, the Special Branch Officers or members of the public.

In fact, the only threat to the lives of the public was from the Paras who opened fire with high-velocity weapons in a built-up, urban environment. Witnesses state that children were playing in the street at the time he was shot.

Instead, as a British Military operation was ongoing in the exact area, there were a number of British soldiers and police nearby and there is no reason to believe that Joe McCann could not have been apprehended and arrested.

7. Against a person carrying a firearm but only if you have reason to think he is about to use it for offensive purposes and he refuses to halt when called upon to do so, and there is no other way of stopping him…

11. If there is no other way to protect yourself or those whom it is your duty to protect from the danger being killed or seriously injured…

16. …If the circumstances do not justify opening fire, you will do all you can to stop and detain the person without opening fire.

The HET discovered a document from the archives of 1 Para entitled “Standard Operating Procedures for Internal Security Duties in Northern Ireland” (p. 75 and following).

a.      Who is attacking you, another solider, or some person in your charge… and you think there is a real danger to yourself or to the other person of serious injury, or to your life or his; and there is no other way of preventing danger.

…When not to fire: You may not fire at someone who either:

a.      Does not halt when you challenge him but is not yet causing any danger to anyone’s life or to the place you are guarding; or

The family of Joe McCann hope that the surviving Paras will be compelled to appear before a Coroner and answer for the killing as they got off on a technicality after escaping justice for nearly half a century.

“These British Army files prove that the Para soldiers deliberately shot my father in the back even though they knew he was unarmed and posed no threat whatsoever. The soldiers of 1 PARA acted as judge, jury and executioner and the British Army’s own files prove it. The killers will hopefully be compelled to answer for the killing of my father at a new inquest.”

“These contemporaneous primary source documents are stark evidence which speak clearly to the mindset of the British Army at the time.  I consider these documents to be fresh and compelling evidence which will assist an already strong renewed application to the Attorney General to order the re-opening of an inquest into the death of Joe McCann.  An inquest is necessary as this is a legal forum at which Soldiers A and C will be compellable to attend and give evidence, and be cross examined, something which the criminal process failed to achieve. Given the failure of the criminal process, the State continues to be  in breach of its obligations under international law, article 2 of the European Convention on Human Rights, and as such an Inquest is required to discharge those obligations.”

The McCann family has been supported for many years by the Pat Finucane Centre (PFC) which commented:

“Once again condemned by their own documents. No wonder they have sealed so many files for 100 years.”