Today is the 50th anniversary of the execution of three Scottish soldiers on a lonely brae overlooking the city of Belfast.

Their names were John McCaig (17), Joseph McCaig (18) and Dougald McCaughey (23). The teenagers were brothers. All were friends and Fusiliers in the 1st Battalion Royal Highland Fusiliers (RHF) stationed in Belfast the month before.

Their execution by members of the Provisional Irish Republican Army (IRA) was another significant turning point in our shared history and a downward spiral towards a long war. 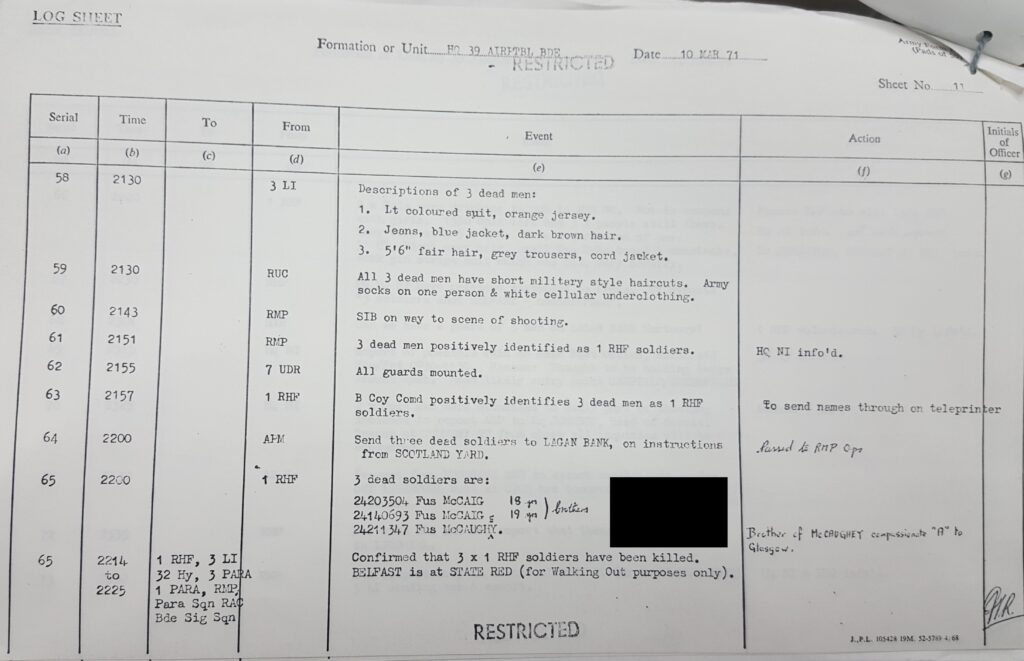 Because of their personal stories – their youth, their family ties, the fact they were off-duty and lured to the place of execution – the killings precipitated widespread protest and led to the resignation of the then Northern Ireland Prime Minister and former British Army Major, James Chichester-Clark. It had an immediate impact on British military operational orders and policies too.

The context of the time was such that the deliberate killing of unarmed civilian William Halligan (21) by the British Army’s 3rd Battalion Parachute Regiment close to his home in the Lower Falls a few days before did not register similar attention in the media, on the streets or in the halls of power. The 50th anniversary of William’s killing was on 5th March past.

Nevertheless, the execution and the manner of the execution of the three Scottish soldiers remain emotive to this day, though, and not only for the soldiers’ families as is human but also for a large section of our local community. This deep emotion is stressed every time the memorial to the 3 Scottish soldiers is vandalised – and we note that it has been vandalised on the 50th anniversary of the killings.

Not only do we read about the discovery of the “EXECUTIONS” in real-time, but also the immediate impact that it had on the operational orders of the British Army local Unionist community.

A State Red for Walking Out was imposed immediately for British soldiers not on duty. The three Fusiliers had been off-duty and drinking in Belfast City Centre pubs before being lured to White Brae, Ligoniel. Britain then increased the minimum age of an operational soldier to 18 years of age.

The files record important evidence from two Corporals who were in the same pub as the three Scottish soldiers – they report that they were not in the company of women as was alleged but with 5 men. One of the men was:

The Head of Special Branch wanted to speak to the Corporals straight away. 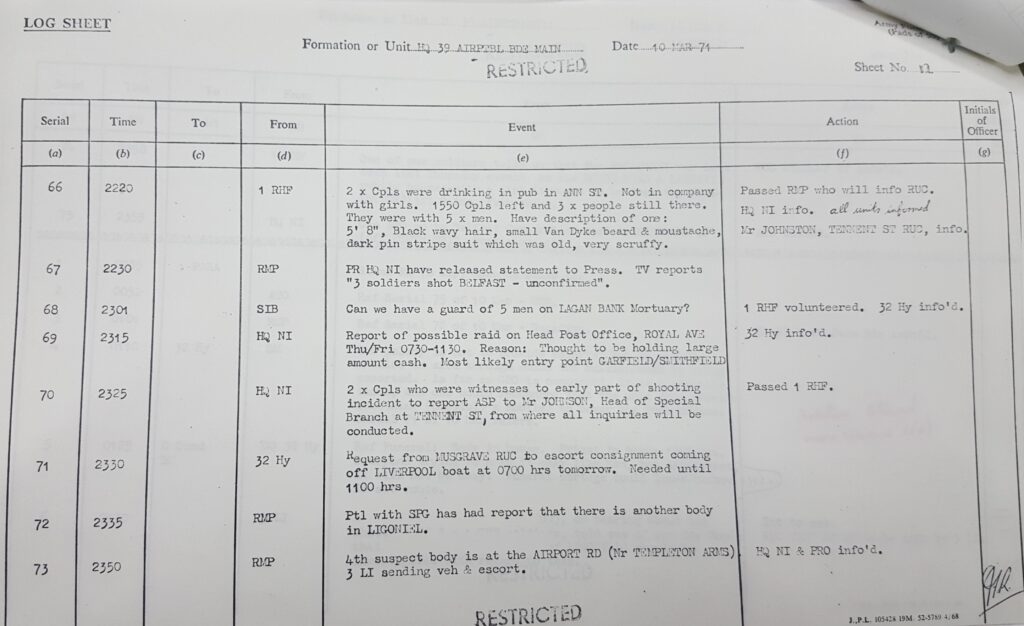 Later reports from an informer of 3 Para record the allegations that the three Scottish soldiers were lured to White Brae by women and caught in a honey trap:

“Ref [reference] killings – killers from South, org [originally or organisation] from Belfast. Three Belfast girls involved, gang in Belfast still being set up for another kill. Informant says they were Brady [Provisional IRA].”

The files also record donations given to local sentry posts and barracks along with massive rallies and rising unrest, especially in the Unionist community.

The British Army forwarded information to its Intelligence section regarding a UVF meeting and threat to kill three Catholics as a reprisal. When Internment was introduced a few months later, the British state denied any organised Loyalist violence existed.

“Ulster Volunteer Force will be meeting in Ballymacarrett ton[ight] to discuss reprisal (on a tooth for tooth basis) against the Cats [Catholics] for killing the 3 1 RHF soldiers. 3 Cats [Catholics] to bite the dust in the next 2 or 3 days.”

We now know, of course, that the killing of the 3 Scottish soldiers radicalised a new generation of Loyalists and pushed many of them towards violent extremism.

What may be important to the families’ campaign for truth, is record of the impact that it had within the local Irish Catholic community as well. The British Army’s 39 Brigade logs detail numerous records of human intelligence sources offering unsolicited information.

These sources were from the likes of Ligoniel, New Lodge and Falls Road.

In one example, the British Army swiftly arranged a decoy Vehicle Checkpoint (VCP) within 10 minutes to give cover to speak with a North Belfast taxi driver with information.

In another example, a drunk man walked into a British Army barracks and offered information on who killed the 3 Scottish soldiers.  He was first interviewed by an RMP Special Investigation Branch Officer who recorded his claims that he was an IRA member. SIB then directed that he should be tasked to British Military Intelligence and Scotland Yard who advised he knew nothing the following morning which lead us to believe that they had differing intelligence already in their possession.

What all of this information was, what its intelligence grading was, and, importantly, what British Military Intelligence did with it remains essential to the families’ campaign today.

Paper Trail is liaising with a solicitor firm supporting the victims’ families.

In this Paper Trail Pro podcast, we examine the Myth of the Orange Pimpernel. Secret British archives prove that Gusty Spence did not escape from… 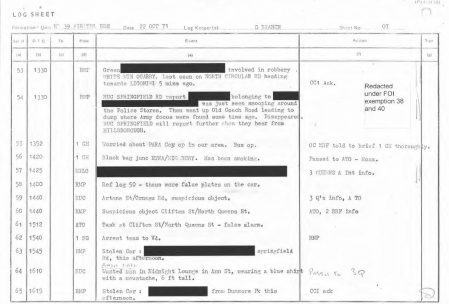 Is this the earliest record of an operational Military Reaction Force (MRF)? A British Army 39 Brigade Commander’s Diary from October 1971 could have uncovered…