The Battle of St. Matthew’s was a pivotal moment in our local history and we have much to learn from it still.

The 27/28th June is the 50th anniversary of the battle around the parish church in Short Strand. 3 men were shot dead and over two dozen injured. The local area around Ballymacarrett and Newtownards Road was devastated.

Alongside the Falls Road Curfew a week later, the Battle of St. Matthew’s marked a turning point in the relationship between the Irish Catholic community and the British armed forces.

The events that night were also formative for the nascent Provisional IRA and, arguably, allowed it to reclaim its role as defenders of its community following the summer of 1969.

To this day, though, our communities contest what happened that night, including even the name “Battle of St. Matthew’s”. Along with the legends, there may be myths… or there may not be. As with all of the events in our recent history, the truth might be somewhere in between.

There are three main narratives.

Nationalist/Republicans commemorate the Battle of St. Matthew’s as the defence of the area from a sustained attack by Loyalists which was allowed by the British Army and police; Loyalists/Unionists remember it as a trap and ambush; the British Army contends that it did not intervene as it did not have the man power/resources in the area.

The British military archives below are but one side of the Battle of St. Matthew’s, but historic nonetheless.

Even though these represent the viewpoint of the British armed forces and these forces were on the periphery of the main battle area for much of the event, the chaos and danger of that night pervades. The language is succinct and prosaic due to the medium, but you can almost feel the heat of the flame on your face and the sting of smoke in eyes; and hear the deafening crack of bullets and screams of battle.

There was widespread violence across Belfast early on 27th June 1970 and battles raged across the bridge at North and West Belfast interfaces sparked by contentious Orange marches. Who started these particular battles are contested to this day too. Another 3 men were shot dead during fighting at these.

These files show the main British Army movements and operational orders as it tried to deal with these battles throughout the day and night. The British Army logs do indeed appear to show just how stretched their resources were between battles at Shankill, Ardoyne, Whiterock and Unity Flats as well attempting to provide cover for its normal duties.

These logs show how the British Army moved companies and even sections across the city to deal with rising, violent situations.

The Situation at Ballymacarrett

Nevertheless, the records show that the RUC expected more trouble in Ballymacarrett at 10pm after an altercation between residents and bandsmen and warned the British Army.

Whilst 45 Commando appears to apportion blame here, it has little else to say about the incident at that juncture which may intimate how little it considered the fracas at the time. In fact, as early as 643 pm, the Commander of 45 Commando told his section 54 B

“to get the police to cope. Reserves are short.”

The British Army files further show that at 8:24 pm, the RUC District Inspector (DI) in the area was:

“extremely worried about the situation in East Belfast. Worried that all the work done in the last year will be destroyed in one night… that something may well develop (very quickly) in Ballymacarrett to relieve the situation in West and Central Belfast”

This was an astute reading of the tensions building that day in the local area and history has proved him correct.

Despite the warning and a long history of intercommunal violence in the area, the British Army Commander paid little heed or chose to allocate forces elsewhere.

At 2050 hours [8:50 pm], he issued his orders but prioritised and highlighted other areas of Belfast such as Unity, Cupar, Townsend, Hooker and Disraeli, Ballymurphy and Sandy Row. He warned that “RUC do not expect to operate in areas where there has been shooting” and that they only had a small Brigade Reserve.

Nevertheless, all units were to assume Red Alert and their mission was clear: 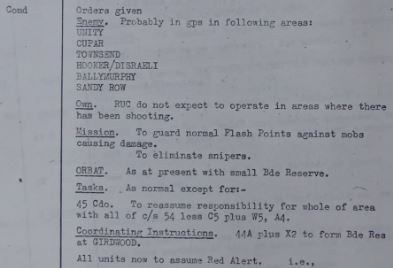 So, as far as the ensuing Battle of St. Matthew’s is concerned, by its own mission standards, the British Army failed and failed miserably.

It also reneged on an agreement between the British Army and the Ballymacarrett Citizens’ Defence Committee (CDC) from September 1969 which stipulated that:

“The military commander agreed that the Army would accept full responsibility for the defence of the area against any attack from the outside whilst security patrols were in operation.”

There would be no reduction in troops without prior notice to the CDC.

Approximately forty-five soldiers would be involved in any one night in guarding the area, with large military reserves available at not more than ten minutes’ notice.

Read more about this agreement in an article by historian, Kieran Glennon, on the Village Magazine.

They were local Citizens’ Defence Committee (CDC) representatives worried for the safety of residents and St. Matthew’s Church.

45 Commando only had between 10 – 20 British troops on the ground. 54 B denoted the Second Section of 4th Platoon of 5th Company of 45 Commando.

9 Field Squadron and  9 Independent Para Squadron were reported to be prepared to come to Mount Pottinger within 10 minutes but Brigade reported around the same time that there were no Reserves available.

This was an immediate breach of the protocols of the agreement above and left the area defenceless to attack unless the local people prepared their own.

I have assumed this refers to Newtownards Road and not Newtownards town due to information before and after.

It is moot whether the police at this time misread or underestimated the potential danger of a crowd moving towards the flashpoint. Considering the tensions across the city and in the area that day, and, indeed, the fears of their own District Inspector, we may wonder why they could have.

Nevertheless, at 1126pm, 45 Commando reports that these:

“Crowds are being held back. Several reports of shots have been received. Have been threatened by crowd to get out in 10 minutes or else.”

The RUC reported shooting at 1135pm with several people injured. Then 45 Commando section in East Belfast, 54 B, reported shooting from Seaforde to Harlande which quietens until 20 minutes later when the trouble begins again in earnest.

Again, who fired first and why is contested to this day.

“The person who started the shooting in SEAFORDE RD area [REDACTED], small, skinny, and has a mandarin moustache, age 23 – 25 yrs. Grocer by trade.”

Nevertheless, although the British Army appears stretched and badly equipped for the developing situation at Short Strand, it is by no means a passive onlooker. Importantly, it reported at a critical juncture at 237am:

At 0331 [3:31 am], 54 B reported that it had armed vehicles on the scene and wanted permission to open fire if CS failed. The Brigade Commander re-clarified the conditions for opening fire – British soldiers’ lives had to be in danger and bombs actually landing among soldiers. Meanwhile, the Battle of St. Matthew’s continued to rage, with its violent threat to life and property unabated.

45 Commando later deployed sub-units in the early hours on offensive raids. Acting on a tip-off from a woman, the British Army unit c/s 29 captured two men with a cache of guns and ammo including 2 Thompsons SMG, 1 Browning pistol and 5 Shotguns. As the area of the raid and the addresses of the arrestees were in the Short Strand, we can surmise that this was a significant haul of Republican weapons for the period and the arrestees were Republican suspects.

This is potentially new and significant information for matching ballistics and forensics with bullets that killed and injured people although, due to the impact of the global pandemic, Paper Trail has yet to prove that these arrests and haul were reported in the media or the named arrestees were actually connected to the arms find or convicted. We believe that one at least was a well known Republican in the area.

These represent a very important and historic record of the Battle of St. Matthew’s from the perspective of the British Army.

The British Armed Forces were stretched and badly equipped in the area but made significant errors in prioritising or planning for trouble in the east of the city.

Even it had misread the potential for trouble in the area (and it should not have), local, trusted representatives and the RUC District Commander had forewarned the British regiment. This was reported to Brigade. So, there are serious missed opportunities for the British Army to have prepared for the attack on the area.

The RUC, though, then appeared to downplay the growing and moving crowds along Newtownards Road towards Short Strand and then the trouble began.

As detailed in the above file, the British Army estimated that there were around 1650 shots fired by Republicans and Loyalists – 1500 Republican and 150 Loyalist – although it would be difficult to estimate in the close confines of the battle and from the outside which side fired what. The IRA leader in the area who was shot that night, Billy McKee, estimated Republicans fired around 800.

It is then proved in their own military logs that the British Army was not simply standing back at the periphery but attacked the main IRA defence for the area and even arrested two men allegedly along with a haul of weaponry.

As for its operational orders for the night, by its own standards, the British Army failed miserably at the Battle of St Matthew’s as its mission was two-fold: (1) to guard normal flash points against mobs causing damage; (2) to eliminate snipers.

The British Military would argue that it could not complete these missions at Short Strand with the resources it had on a night as it was stretched across Belfast due to widespread violence.

But it remains that it broke its agreement with the Ballymacarrett Citizens’ Defence Committee and left Short Strand perilously unprotected from Loyalist attack. So, the local community had to protect themselves.

If only the British Army had listened to the RUC’s District Inspector as he was right and the ramifications of the violence that night were felt for many years later – no less by the victims and their families.

Names of those Killed