Nobody in the Market was certain who killed Joseph Downey.

A local witness at the inquest said he had watched Joseph Downey walking up McAuley Street in the Market, Belfast, close to his home and had shouted a warning to him there was shooting in the area. He thought Joseph had been drinking and did not hear his warning. Joseph, 23, was shot dead at the top of the street, hit in the neck with a low-velocity bullet.

Belfast was a dangerous place that particular night.

Close after the turn of midnight of 21st July 1972, the Ulster Defence Association (UDA) shot dead a shopkeeper on his doorstep in Clovelly Street, West Belfast. Then, after lunchtime, the Irish Republican Army (IRA) exploded over 20 bombs across Belfast and killed 9 including a 14 and 15-year-old. 130 were injured. We now know this atrocity as Bloody Friday but there was more blood-letting to come.

Loyalists also set up illegal vehicle checkpoints across the city, stopping and searching cars and ordering people out of vehicles, dragging some. British military archives show that not only did the British Army and police record these illegal checkpoints and liaise with some but also recorded their illegal activity whilst ensuring that the British Armed Forces had access throughout. Meanwhile, the UDA shot dead another Catholic in the hallway of his home in North Belfast.

3 Catholic civilians dragged from their cars later that night were “rompered” – or tortured in Belfast parlance – in Loyalist clubs and then executed. A member of our extended family, Francis Arthurs, was one of these victims.

Bloody Friday was the bloodiest day of the bloodiest month of the conflict. 90 souls were lost in the North of Ireland in July 1972. Atrocities like the Claudy bombing or Springhill Massacre were punctuated with individual state and paramilitary killings and, as always, random sectarian killings. All communities suffered and no organisation was blameless.

The British Army’s reaction that night of Bloody Friday was swift – thousands of British troops raided the homes of scores of IRA suspects and carried out massive cordon and search operations across the city leading to gunbattles in Republican areas. The Market was one of these areas where violence erupted.

Joseph Downey seemed oblivious to the fighting and the threat as he walked towards his home in Henrietta Street shortly before 9pm. Then, he was shot dead and local people could not get to his body for nearly an hour as a firefight ensued.

It later transpired that Joseph Downey was a member of the local IRA although he had only joined a few weeks previously. It may have been too easy to conclude for some that he was killed by a British Army sniper whilst on active service or he was caught in IRA crossfire during firefights in the area. The British Army told the coroner that its soldiers had engaged gunmen around McAuley Street, Cromac Street and Joy Street but they were only using high-velocity bullets. Joseph, though, was hit with a low-velocity round.

A police witness at the inquest (Belfast Telegraph, 15 February 1973) said that swabs taken from Joseph’s left hand contained lead particles which could have been consistent with firing a gun.

Nevertheless, a forensic science expert testified that the particles could have been deposited on his left hand if he raised it to protect himself. Medical evidence showed that he had drink taken too.

The Coroner returned an open verdict, saying it was a confusing case, and probably what had happened would never be established.

The following archives feature among one of our most important discoveries as they record the circumstances of scores of violent deaths in the Belfast area in the month of July. Following our Freedom of Information request over a year ago and subsequent Public Interest Test, we finally gained access to part of these important files.

Paper Trail has spent the last couple of months collating the information, writing summary reports on new archival evidence and trying to get it to the families who need the information most and regardless of their background or creed.

The family of Joseph Downey is one of those grieving families, and the new evidence is significant.

A British Army patrol of the 1st Battalion of the Welsh Guards (1 WG) retrospectively log contact in the area of Joy Street and the junction of Cromac and Ormeau, at the time when and close to where Joseph was killed (see map of the area below in the 1970s courtesy of author, John O’Neill) 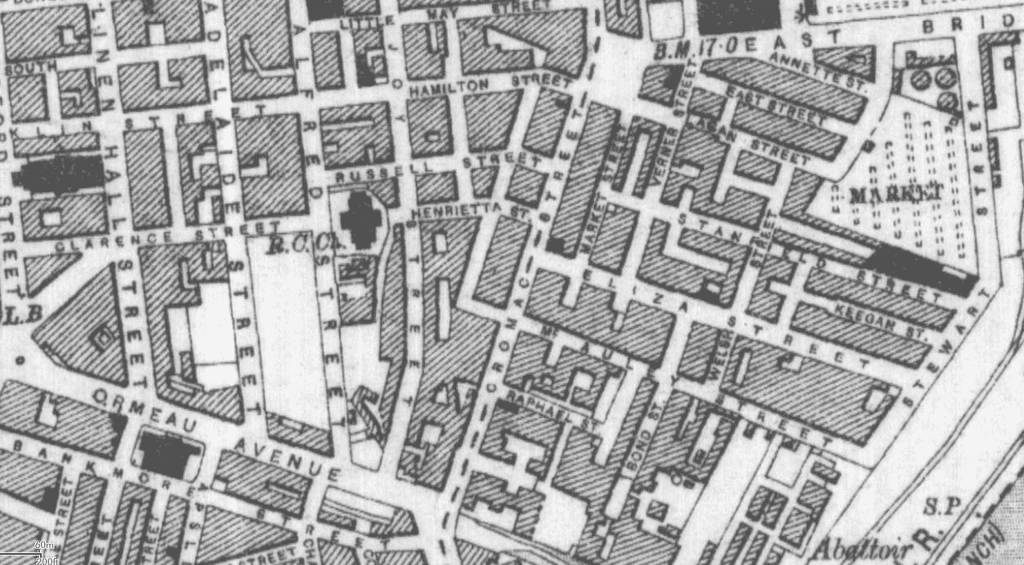 At 2037 (8:37pm), 1 WG report to British Army Brigade Headquarters that 15 shots were fired at one of their patrols and that it returned fire with 10.

This begins vicious firefights in the areas of Joy Street and Cromac Square post Ormeau and Bankmore. The sub-unit of 1 WG claims 2 definite hits on target and possibly 3.

At 2122 hours (9:22pm) the Kings Regiment log the admission of casualties to the Royal Victoria Hospital. Two of these were shot in the back in the area of the junction of Joy Street and Ormeau Avenue. Interestingly, because of the area the shootings occurred, the religion of two of the injured is recorded as “C of I” which is Church of Ireland Protestants.

Admitted with them is a Catholic (“RC” for Roman Catholic) aged 51 who was hit with a gunshot wound in the shoulder in the area of Cromac Street and Eliza Street which is the junction before where Joseph was killed.

1 WG give further information and record that its sect came under fire and that it returned fire in the area of Joy Street, Cromac Street and Alfred Street. It claimed 2 hits, one of which it calls “a woman gunman”.

At 2335 hours (11:25pm), the Welsh Guards offer further information regarding the casualties at 2045 hours although part of the file has been badly copied by the authorities. What is clear though is that the cause of this particular firefight with the British Army: “Prod [Protestant] car with 2 occupants came out of Cromac Street and was riddled with bullets. Both injured one “might be _______ [REDACTED]”

Just over 20 mins later, 1 WG gives Brigade further information about the “Market’s shooting” and the identity of the woman but this is redacted. The .22 rifle was found in the car with her, though.

The British Army intelligence summary (INTSUM) for the week makes grim reading throughout. Under “PROTESTANT ACTIVITIES”, the British Army commends the UDA for the control it had over its members after the Bloody Friday bombings even though it had killed Catholic civilians that night.

Significantly for the family of Joseph Downey, this INTSUM records that a “sortie” by Loyalists in the Market resulted in two of them being wounded and we know from the previous logs that it was the Welsh Guards who shot them. The Loyalists shot 3 Catholics, one of whom was Joseph who was fatally wounded. The British Army records that “the wounded Protestants were found in possession of a .22 rifle and were found to be: …”

Again, their names are redacted, as is a Comment below which goes on to say it was a UVF inspired attack and a third Loyalist who escaped may have even been ____ [REDACTED] himself.”

It was obviously a well-known Loyalist (due to the reflexive use of “himself”) and connected to one of the wounded Loyalists named above the Comment. 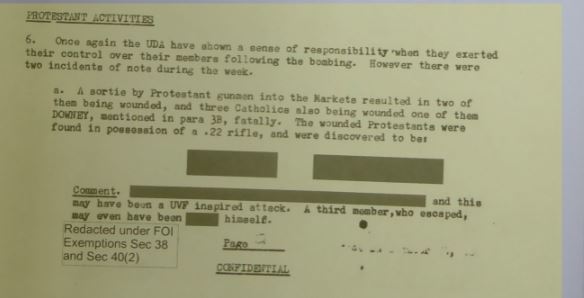 The Killing of Joseph Downey

None of this critical evidence was presented to the Coroner at the original inquest and it supports the witness testimony of the local witness and the medical and forensic experts.

Loyalists drove down Cromac Street and shot 3 random Catholics at the junctions of Eliza Street and McAuley Street. Joseph might have seen the rifle or expected the gunshot which killed him and held up his left hand to protect himself. There is no way that the attackers knew that Joseph was a member of the IRA. He was their next random victim.

As he lay dying, the Loyalists drove on a few metres and turned right onto Ormeau Avenue where they ran into the patrol of the Welsh Guards at the junction with Joy Street.

A firefight ensued and two Loyalists were badly injured in the car, one woman and one man. A .22 rifle used in the attacks was found beside them. At least one well-known Loyalist “slipped away”.

The distribution lists for both the Brigade logs and the intelligence summary prove that British military headquarters and RUC headquarters knew that the UVF gang killed Joseph Downey as the Welsh Guard had apprehended two of the culprits and one of their murder weapons.

They buried this information though. The .22 rifle disappears from any subsequent investigation and the two Loyalist killers are not prosecuted for the random shootings and the subsequent firefight with the Welsh Guards.

Joseph Downey’s family was left for 47 years without truth and justice. Two other victims of the attempted mass-murder were failed as well.

These files should be enough new evidence to seek a proper inquest and investigation even if the public is not privy to the names of the Loyalist attackers which are redacted.

Nevertheless, to complete this stage of our research, Paper Trail examined newspaper archives in case the incidents were recorded. Bloody Friday was such a devastating day that we may not have expected to find much information in newspapers as the reporters may not have had the capacity to deal with so many killings.

Surprisingly, though, there is a lot of information relating to a man and woman who were shot in a car in the Joy Street area on the night of 21st July 1972. There are no other people shot in a car anywhere near there that night in the British military records or news reports. The papers even record that the person who escaped may have been the most well-known Loyalist of the time.

No rifle is reported found and the injured man and woman in the car are reported as innocent victims shot by the IRA and not the Welsh Guards.

The woman named in the numerous newspaper reports is Louie Spence, wife of Gusty Spence, who was on the run from prison at the time, and the person alleged to have escaped is Gusty himself. Another Loyalist is reported to have escaped with him.

Irish Press: Mrs. Gusty Spence Shot in the Back

As Gusty and Louie Spence are deceased, we have reverted to the National Archives to remove the redactions in the files above as there will be no data protection, national security or health and safety issue that demands that they remain.

The Irish Independent further reports that “police in the area were keeping under observation UDA vigilante-type patrol which was suspected of being armed”.

Sure enough, there are various reports in the files of police in the area who were pinned down during the firefight in the area before being rescued finally in the area of May street/Cromac Street.

The family of Joseph Downey and the legal team will be querying the police whether these RUC officers were indeed observing the Loyalist killers as they may be fearful that they even had foreknowledge of the attack or even lead the gang into the area.

In this Paper Trail Pro podcast, we examine the Myth of the Orange Pimpernel. Secret British archives prove that Gusty Spence did not escape from…