Statement by the family of Patsy Kelly on the discovery of startling new information which points towards a cover-up by the British state. 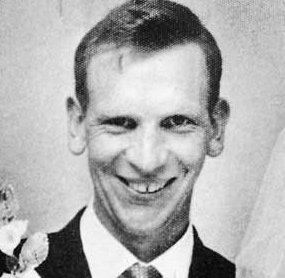 Startling new information relating to the 1974 abduction and murder of Independent Councillor, Patsy Kelly (right), from Trillick, Co. Tyrone, has been uncovered following a freedom of information request on behalf of the Kelly family by Ciarán MacAirt of the charity, Paper Trail.

The information is from British Army record in a Brigade Operations Log dated 13th Aug. 1974 [view PDF], soon after the discovery of Patsy Kelly’s body at Lough Eyes, Co. Fermanagh.

It records that ammunition connected to the discovery of the body was found in the lough, some of which matched the same calibre of bullet that was used to murder Patsy Kelly.

Connecting the ammunition find to the discovery of Mr. Kelly’s body, the log sheet reveals this exact detail from the 1st Battalion of the Royal Tank Regiment:

“CONNECT SERIAL 18 OF 10 Aug [relating to the recovery of Mr. Kelly]

The bullets recovered from Patsy Kelly’s body were .45 calibre. Serial 18 of 10thof August 1974 is shown below.

In light of this new information which has never been revealed to the Kelly family before, they now ask the following questions:

(1) Why has this important piece of information been withheld for almost 45 years?

(2) What important evidential opportunities were lost by police by failing to include this ammunition find within any investigation?

(3) Why was this ammunition find never revealed to the original inquest?

“This new information calls into question every single investigation that has been carried out by the police from 1974 to date into my father’s murder.

How could such a vital piece of information have either been withheld or never been uncovered following so many alleged previous investigations? The fact that this information was never submitted to the original inquest throws yet another very sinister twist on the history of this case. We will continue to seek the truth about my father’s murder and it is simply disgraceful that the pain & anguish of our family is being compounded by continued inaction & cover-up by the authorities.”

“This archive discovery proves that significant evidence was discovered and directly linked by the British Army to the murder of Mr. Kelly but it has since disappeared from each investigation which is disturbing considering that local members of the British Army’s Ulster Defence Regiment were alleged to be the perpetrators. Disturbingly too, we have also targeted, discovered and requested preceding documentation but the British Ministry of Defence and the National Archives have applied a Public Interest Test to its release. So, at the moment the British state is still withholding evidence from the Kelly family and their legal representatives.”

“The discovery of this information for the first time, 44 years after the murder, raises many serious issues apart from the obvious one of why police withheld this evidence.

What other evidence which might point to the killers being connected to the security forces is still out there? The police and the British government must now come clean on what has all the appearances of a state-sponsored killing, and subsequent cover-up.”