New evidence proves that the British Army killed a Protestant civilian but blamed it on the Irish Republican Army.

Secret British military archives prove that a soldier of the King’s Regiment killed an unarmed Protestant civilian in his workplace, but the British Armed Forces then covered up the circumstances of the killing and blamed it on the Irish Republican Army.

Over the last two years, the charity Paper Trail (Legacy Archive Research) has recovered British Army logs from a 39 Brigade Commander’s Diary written in July 1972 which prove that night watchman, Thomas Mills, was killed by a soldier of the King’s Regiment.

Sunday 18th July is the 49th anniversary of the killing of Thomas Mills.

This new evidence has been submitted to the family’s legal team and the Coroner’s Office as a new inquest into the killing of Thomas Mills is due to begin in October of this year. The new evidence also features in a Paper Trail investigation of a number of similar murders of unarmed civilians by King’s Regiment in the summer of 1972 which lay unclaimed by the regiment or, indeed, the British Army.

Just over an hour before Thomas Mills’ killing, Kingsman James Jones was shot dead by the IRA at a British Army Observation Post [OP] at Vere Foster School [2003 hours].

There were no further shots reported by the British Army in the area until the same Vere Foster OP reported at 2115 hours that the Kingsmen:

Finlay’s Packaging Factory and its grounds stretched from Ballygomartin Road to Moyard.

The procedure for any British Army shooting was for SIB to investigate and for HQNI to be informed.

Within minutes, the British Army knew it had shot Mr. Mills. There was no gunman. Thomas Mills was working and unarmed when killed.

“Watchman – dead. STARLIGHT picked him up on his way to hospital.”

Starlight is the British Military call sign for a Medical Officer.

A report from King’s Regiment is recorded around 2130 hours:

“Stated that he was holding a pistol that went off. Action: Int[elligence] asked for trace.”

Intelligence is asked for a trace on the victim and a line is drawn through this as N.T. is written above it – No Trace. The British Army could not connect the victim to any criminality or paramilitarism. The lie that he had a pistol that went off and mortally wounded him would be even more unbelievable.

King’s Regiment again reported the location of the alleged gunman it shot at 2141 hours:

But then at 2200 hours, King’s Regiment tried to separate its reported hit of an alleged gunman at Moyard and the killing of the unarmed civilian:

This excuse is unconvincing considering the British Army recorded only its fire at an alleged gunman when and where Thomas Mills was killed.

Nevertheless, a British Army Situation Report (Sitrep) written the following day and accessed by Paper Trail for the family is blunt:

The British Army knew that it had killed Thomas Mills and this is its open admission.

The media at the time reported:

"The RUC [Royal Ulster Constabulary] say they do not know the circumstances of the shooting but are working on the theory that he may have been wounded during a gun attack on the Vere Foster Army post."

The RUC was privy to the information in these logs but did not investigate.

The Coroner at the inquest into Thomas Mills' death was not given this evidence and recorded it as misadventure.

The Historical Enquiries Team first informed the family that its investigations found that the British Army killed him and the family secured a new inquest which will finally be heard in October.

This new evidence proves that it was Kingsman who killed him, firing from Vere Foster's northern OP. Vere Foster was in B Company, 1 King's Regiment control during the summer of 1972.

The new evidence also shows the dynamics of the British Army creating lies to cover up its killing. These lies reach HQNI level and are covered by the RUC.

What should also be investigated now are the other killings and cover-ups committed by the King's Regiment in the summer of 1972.

Paper Trail can help here too.

Either the King’s Regiment soldiers made a terrible mistake an hour after Kingsman Jones was killed at Vere Foster or they were out for revenge. 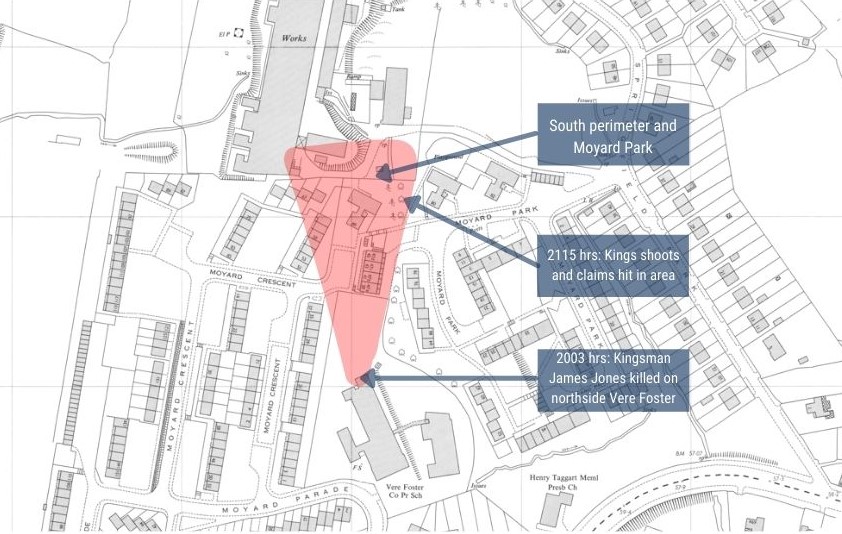 Throughout the conflict, there are many horrific examples of British regiments taking casualties and then killing civilians.

Indeed, similar had happened with King's Regiment, a few weeks before it killed Thomas Mills.

Kingsman Alan Buckley was killed by the IRA in the aftermath of the Kelly's Bar Massacre.

The following day, a B Company Kingsman targeted and killed 13-year-old Martha Campbell from a firing point in Moyard.

What is certain on the night of 18th July 1972, is that the British Army’s cover-up of Mr. Mills’ killing was calculated and cold-blooded.

The British Army knew its soldiers killed him but instead blamed it on the IRA.

Even more frightening, this killing is but one of a number of killings of unarmed civilians by the King’s Regiment which were covered up and feature in a number of Paper Trail investigations. These killings include the murder of 13-year-old Martha Campbell (14th May 1972) and the Springhill-Westrock Massacre (9th July 1972).

The same regiment also played its part in the cover-up of the Kelly’s Bar Massacre (13th May 1972) and the murder of Anthony Davidson (21st July 1972) which are covered too in soon-to-be-published Paper Trail investigations.

The blatant murders and cover-ups by the King’s Regiment, which we are exposing nearly half a century later, did little but inflame the conflict in 1972 and compound the grief of the victims’ families. The British state this very week has devastated these families again as it announced plans to bury its war crimes and protect its killers in uniform.

Paul McNickle of McConnell Kelly and Co. Solicitors represents the family. He said:

“The family of Thomas Mills welcome this material uncovered by Paper Trail in the run up to the Inquest into their father’s death which is scheduled to begin in Banbridge Courthouse on 4th October 2021. Given the developments in British Parliament in the last couple of days, the exposure of material such as this underlines the necessity for victims and their families to have proper access to justice and the ability to engage in Article 2-compliant coronial proceedings into the circumstances of their loved one’s death."