Bloody Friday – Missing Warnings and Missed Opportunities to Save Lives

Last Thursday was the 50th anniversary of Bloody Friday atrocity.

The searing images of Bloody Friday remain some of the most devastating of the conflict - burnt torsos that were once human beings shovelled into bags; puffs of smoke above a cityscape; panic; the terrified, shell-shocked faces of the victims and survivors.

On 21st July 1972, the Irish Republican Army (IRA) detonated 19 bombs across the city of Belfast, killing 9 people and injuring 130 - most of whom were women and children.

We have been working with families impacted by the terrible violence that whole day and night and made the secret files and newspaper archives available to victims and survivors - research that otherwise would have taken them years of delay and hundreds of hours of work.

Half a century later, whilst the victims and survivors still demand truth and justice from the perpetrators, these historic files offer new evidence from the responders.

Even though such military records tend to be curt and prosaic, it is difficult not to discern the stress, panic, and horror as warnings and explosions are reported in real-time.

The newspaper archives Paper Trail included then depict the aftermath - the human stories and impact on real lives.

Find out how you can access the files here >> 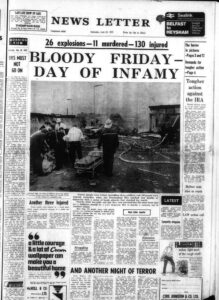 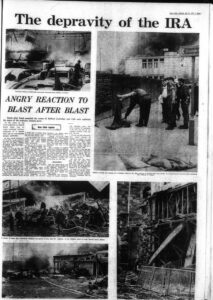 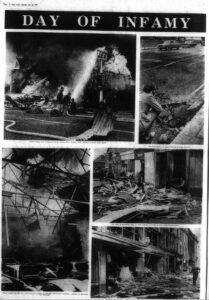 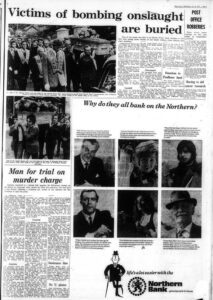 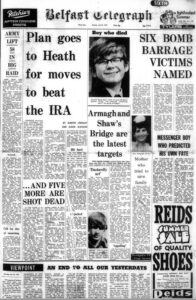 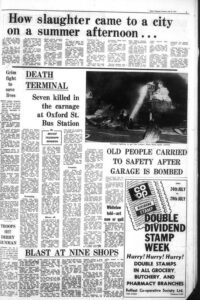 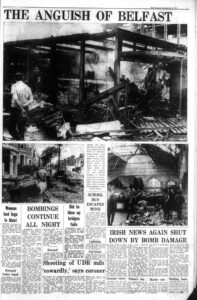 Map of the Explosions from the Daily Mail

These previously unpublished British military files are now part of the public record after Paper Trail discovered them and accessed them via the Freedom of Information Act. Files are redacted or - as in the case of the British military Situation Reports for Bloody Friday - missing without explanation.

The archives we have secured offer a minute-by-minute account of devastation and heroism recorded by first responders.

19 massive bombs rocked Belfast over a period of around 80 minutes. 12 of these exploded in different locations within a 20-minute period; 6 within a 3-minute period.

Only for the emergency response of the British armed forces, the health services and civilians, scores more would have perished. First responders also had to deal with hoaxes and the continuous threat of ambush.

Nevertheless, these files also highlight human failures and missed opportunities to save lives.

When interrogating the files, researchers will look for incoming intelligence and warnings. Indeed, from a British military intelligence perspective, the failure to detect such a massive IRA operation that mobilized men/women and materiel from each IRA battalion area of Belfast is notable.

It should be remembered too that July 1972 was the bloodiest month of the conflict, the British armed forces were stretched even whilst on low alert, and Key Points (or KPs) were under continual threat.

Up until a few hours before the first explosion, human intelligence sources recorded in these files had pinpointed one of the target areas for the day of Bloody Friday.

A warning against the Europa Hotel came via its manager at 6:00pm the night before Bloody Friday to say that a threat was imminent within the next 24 hours.

Whilst the Europa earned the soubriquet of "the most bombed hotel in Europe", the threat was considered serious enough for the Welsh Guards (WG in these files) to ask that units of the Military Reaction Force (MRF) helped protect the target area.

As we know from previous Paper Trail research, the MRF was a covert, extra-legal British Army unit at the sharp end of British counter-insurgency. It was originally called "The Bomb Squad" in similar files the year before as a key component of its tasks then was to catch IRA bombers in the act, capture them and then "turn" them.

Welsh Guard Battalion files targeted by the son of one of those killed on Bloody Friday, Robert Gibson - he is also called Robert - pick up this MRF request:

We learn more information as can be expected in these battalion logs: it was a warning of an "attack to blow up the Europa".

The 39 Brigade files confirm that MRF units were at Europa for the 24-hour period of Bloody Friday and that a Mechanical Sniffa team was on call.

On the morning of Bloody Friday around 11:25 am, the Welsh Guards inform Brigade that a:

"Journalist reports he has been warned to keep away from Europa hotel from 1500 [3:00pm] today. (This confirms earlier threat of attack on Europa)."

Around 3:00 pm a bomb warning is then recorded in the area of the Europa at Great Victoria Street Railway Station and Glengall Street which explodes around 3:34 pm. At 4:40, the Welsh Guards then recorded:

"Possibility of bomb in car at rear of Europa. RUC."

The area Glengall Street, Boyne Street, and Europa was cleared at 5: 25 pm before allowing traffic to flow again.

In these files, there was little other in-flowing intelligence regarding Bloody Friday targets prior to the warnings so they remain most important for the records of the day and the timing of those warnings.

MYSTERY OF THE MISSING WARNINGS

All of the fatalities of the Bloody Friday explosions occurred at two bomb sites: Oxford Street Bus Station where 6 died at 3:02pm; and Cavehill Road shops where 3 perished around 3:15pm.

When warnings were given and how the British armed forces responded were questions raised immediately by the families and the media.

The Sunday Times published an article under the banner of "Mystery of Bloody Friday's Lost Warnings" on 30th July 1972 which was picked up on the same day by the Irish Sunday Independent on the same day.

The IRA alleged at the time that warnings had been phoned to the Public Protection Agency (PPA) which had been set up again that month by the British government to field complaints of intimidation and attack.

These articles highlighted the discrepancy between records kept by the PPA and public reports by the British armed forces. The PPA said its logs showed it had passed the IRA warnings on to the British Army immediately - at 2:40 pm for Oxford Street, or 22 minutes before the explosion that killed 6; and 2:07 pm for Cavehill, or 1 hour and 8 minutes before the explosion that killed 3.

The British Army at the time remained "adamant that no warnings were given."

At the Inquest for the deaths of the 3 victims of the Cavehill explosion, a lawyer for the Ministry of Home Affairs rightly praised the heroism of the youngest killed on Bloody Friday, Stephen Parker, who was only 14 years of age (15-year-old William Crothers was killed at Oxford Street Bus Station).

Stephen died trying to clear the local shops. His father, a local minister who then devoted his life to peace-building, was only able to identify his son's destroyed body because of a box of trick matches in his pocket.

The Belfast Telegraph reported that the government's lawyer compared Stephen's heroism to the cowardice of the bombers and pled:

"What type of people plant bombs without warning?"

A report by the Historical Inquiries Team recorded that, whilst it still had found no warning for the Cavehill explosion, there had been a warning passed to the British Army at 2:42 pm for the Oxford Street Bus Station which then exploded 20 minutes later when the Welsh Guards were trying to find it and clear the area. 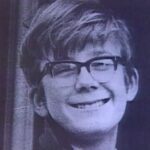 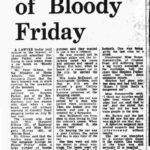 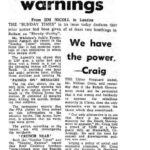 DISCOVERY OF THE MISSING WARNINGS

Paper Trail has indeed discovered the warnings of the Oxford Street Bus Station and Cavehill car bombs, not in PPA files but these British Army Brigade and Headquarters Northern Ireland logs.

We have also discovered warnings for the Limestone Road explosion which miraculously did not claim any lives but horrifically injured many.

This too was recorded as a "no-warning" bombing.

39 Brigade logged a warning from PPA of a 200 lb bomb at Oxford Street Bus Station between 2:25 pm and 2:30 pm (and not 2:40 pm as reported by PPA), over 32 minutes before the explosion which killed 6. The Welsh Guards were tasked and were subsequently caught in the explosion.

Robert Gibson has been carrying out forensic research into the murder of his father at Oxford Street Bus Station and even tracked down Welsh Guardsmen who were caught in the explosion.

His contact affirmed that his WG patrol was not tasked until 2:40 pm which meant a delay of 10 - 15 minutes from the initial warning. Valuable minutes were lost.

The Welsh Guards had also cordoned off the junction of May Street and Oxford street an hour before the Bus Station warning when another massive bomb had been discovered and was being made safe.

Managers had evacuated the drivers' school a little earlier in response to the bomb scare on the nearby Queen Elizabeth Bridge. This exploded at around 2:55pm and shook the Bus Station.

The warnings had been delivered to the various agencies at certain times. As far as I know, the bus people were on the phone talking to the police possibly about the bomb when the soldiers came in. But by that time, it was too late."

At 2:06pm, 39 logged a warning from PPA regarding a car bomb at Limestone Road shops (which included Ulster Bank). The car was described as a Grey Wolseley, car registration 3775 GZ.

At 2:06 pm, 39 Brigade had also logged a detailed warning of the car bomb in Cavehill from RUC, including its registration number:

At the same time, 2:06 pm, Headquarters Northern Ireland recorded a message from its Exchange:

The information for the Limestone Road car bomb close to its junction with Antrim Road was already recorded and correct in the 39 Brigade files when 39 Brigade  was informed at 2:07.

The RUC's Liaison Officer was informed of the Cavehill warning at 2:08 pm but that had already been reported by RUC to Brigade at 2:06.

Thereafter neither the RUC nor British Army record any actions to clear the area or deactivate the bombs at Cavehill and Limestone Roads.

Instead, the car bomb at Cavehill was left in situ for around 1 hour and 9 minutes before it exploded and it was left to young hero, Stephen Parker, and other civilians to clear the area.

The Limestone Road bomb exploded up to 44 minutes after these warnings (British military files record a 2:50pm explosion whilst HET reports 2:40pm). The civilians in the vicinity of the explosion did not know there was an IRA bomb in the suspect vehicle.

It is miraculous that many more civilians were not massacred at this bomb site although many suffered horrific injuries including a woman who lost both legs and a child who lost one.

The HET records both of these explosions as "no-warning" bombs and that is how they were reported at the time.

This is wrong and we need to interrogate why the authorities did not even attempt to clear these two specific locations.

Despite the desperate actions of the British armed forces on Bloody Friday - which undoubtedly saved scores of civilian lives - the families may consider the Oxford Street Bus Station, Cavehill shop and Limestone Road explosions terrible missed opportunities to save lives.

The families may also question why they and the Coroner were given false information by the authorities.

It goes without saying, that the greater questions lie with the perpetrators of every explosion on Bloody Friday, the IRA.

In powerful interviews with the BBC, Robert Gibson said: "The truth is something everybody deserves."

He knows there are Irish Republicans still alive today who can help the families.

"I would like to know what my father and his colleagues went into that day... Were the warnings they had given inefficient?"

130 were physically injured across Belfast, many of whom suffered life-changing injuries.

Complete the charity's Monitoring Form - your reason for contact: "Bloody Friday Archives" - and leave the details required by our funders.

Set up your own individual FREE account on Box Cloud Storage as this allows you to share and store the files we have stored there for this investigation.

Paper Trail sets you up as an individual User and emails you an invite to Box files. Click on the link, sign into Box, and access the files.