There have been many disturbing facts at this week’s inquest into the killing of Francis Rowntree by a British soldier, and not only because he was an innocent 11-year-old child and his family are only getting this semblance of justice 44 years later.

Francis was shot in the face/head with a rubber bullet fired from a few yards away in April 1972 and clung to life for 2 days before he died.

Civilian witnesses at the time have testified that there was not rioting at that time and he posed no threat whatsoever but he was still deliberately targeted. It was also alleged that the rubber bullet was doctored to maximise injury even though it was supposed to be non-lethal if deployed under strict guidelines. Those guidelines were not followed.

The true danger of rubber bullets – after they were tested on sheep – was never released at the time. Safe to say that any bullet fired at the head of an 11-year-old child from a few yards away could be deadly, and was.

The soldier from the Royal Anglian Regiment who killed him is apparently too ill to attend court to answer for his killing of the boy. He has got off Scot free again. One of his colleagues was killed in the area a few days before and it has been mooted that the soldier was seeking revenge by killing the boy.

His commanding officer belatedly offered regret, not an apology. He said he was “convinced we were under threat” but this was after telling the inquest that that he had no memory of that day. “No, no memory at all,” he said. The civilian witnesses – just boys themselves then – remember it all too well. They were playing in the street. Francis was in front, close to the army vehicle and the shot was fired without warning and reason.

We now know that the British Ministry of Defence have heavily doctored the files regarding the killing. Again, we wonder whether they are hiding the information because of national shame instead of national security.

Paper Trail discovered high level files relating to the deployment of the rubber baton round and its plastic successor which was supposed to be more accurate and have greater stopping power. They were written a few days after the killing of Francis Rowntree.

Files from the Head of DS10 within the British Ministry of Defence which were copied to army and government departments, tell us that the new PVC baton round was to be trialled, but not on sheep. It was to be trialled on people from Derry – specifically, on Irish Catholics in Derry.

“I attach a draft submission on the proposed plastic baton round, which is intended for use at the longer range against the hooligans in Derry”

The “hooligans” or “Derry Young Hooligans” was a pejorative term used by the British of alleged rioters in Irish Catholic areas of Derry, mainly the Bogside.

Section 5 of the submission dictates that:

“… there could be no question of using the proposed PVC round… save under the strictest conditions and controls.”

The first of these demands its “use only (in the first instance, at any rate) within the Londonderry City boundaries west of the Foyle”. This is the predominantly Irish Catholic area of Derry, of course, which includes the Bogside.

This submission also records the killing of 11 year-old Francis in a sickening, inhuman way after admitting the danger of these bullets:

“Any baton round, in order to produce a given effect at a particular range, inevitably delivers a harder punch still at shorter range. The rubber round itself can be dangerous… An 11-year old boy recently died from a fractured skull, caused allegedly [sic] by a rubber bullet; no inquest has yet been held, but we understand from the pathologist that the injury was not inconsistent with this cause – though the boy’s skull was quite abnormally thin, more so than the pathologist had ever previously encountered.” 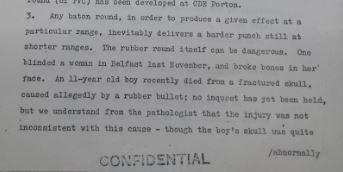 Firing a bullet at the child’s face from a few yards away had nothing to do with the boy’s death, apparently.

However heinous this attempt to defend the killing of an innocent boy may sound to us, this is still no defence in a court of law, even a British one which was heavily supportive of its troops. There is a legal doctrine called the “eggshell skull rule” or “you take your victim as you find him rule” which dictates that the frailty of the injured person is not a defence at all if ever the pathologist found that.

Unfortunately, the alleged frailty of the killer is.

The Slippery Barrier and the UDA

Following in the same file, another crowd control mechanism is discussed by the assistant secretary of the British Defence Minister to CW Roberts of the Cabinet Office, with copies sent to the recipients of the previous papers on the subject.

The “Slippery Barrier” seems a much more humane if not innocuous a form of crowd control:

“First it may be used as a barrier, on its own or in conjunction with more conventional barriers, to prevent marches from diverging at critical points from authorized routes; to block the way of unauthorized marches; or to establish a temporary “peace line” in areas of intercommunal confrontation during periods of tension.”

The civil servant (assumed to be the recipient, CW Roberts) advised that the Secretary of State is to view the file, especially the next sentence which he has marked with an X:

“The purpose of the Slippery Barrier is to prevent rapid or aggressive movement by people on foot and thus reduce the risk of hand-to-hand fighting.”

Whilst it is admittedly “hazardous for innocent people (particularly the elderly) who venture upon it”, the Slippery Barrier is harmless to people (except that they might fall and injure themselves)”.

The civil servant, though, does not highlight its use against the Derry “hooligans” or even children playing in west Belfast which would certainly have minimised death by baton round. He believes that the harmless Slippery Barrier would be best deployed against Loyalist extremists of the Ulster Defence Association (UDA):

“In view of possible Army/UDA confrontations this could be very useful.”

In this Paper Trail Pro Podcast, author Ciarán MacAirt discusses the legacy of General Frank Kitson. This is the second part of a two-part podcast examining the…